Copper, our busy senior Malinois, was not an easy puppy.  Few Malinois are.  If you’re a first-time puppy owner and for some reason think that it’s a good idea to get a Malinois, go and get yourself checked in.  Few people are qualified to take on this kind of level of responsibility.  I have LITERALLY been on the clock for over 15 years.  15 years of training, 15 years of preventing boredom and the inevitable destruction that follows the boredom.  Every Day.  Don’t get me wrong, he has an off switch and as he’s gotten older we’ve been able to relax our guard little by little, but still, at the age of 15 years old, he has the capacity to get bored and get ‘into stuff’.

At a little over a year and a half, we started competing.  He had shown that he was starting to understand complex concepts in locations that were unfamiliar to him – he had learned to generalize.

At about three and a half years old, I was finally at a stage where I genuinely liked him.  Don’t get me wrong, I have loved him since the moment he fell asleep in my arms at the tender age of 4 weeks at the breeder’s house but liking him is a different matter.  At three and a half I was able to let my guard down a bit and really trust him to not make crap decisions constantly.

Somewhere at about eight years old he really wowed me.  This boy had come into his own and we seemed to have this near telepathic connection.  We seemed to know instinctively what we each needed.  It’s not that we didn’t have plenty of miscommunication in the ring, but the emotional support that we each required was crystal clear. I understood him and he understood me, and there was this connection that I can’t explain except that it was akin to finishing each other’s sentences.

At ten years old I sat him down and asked why he couldn’t have been this dog for the past ten years.  He explained to me: “I was cookie dough. I wasn’t not done baking. I wasn’t finished becoming whoever the hell it is I was gonna turn out to be.”.  I asked him why he was quoting Buffy?  He told me to throw the damn ball.

At 12 years old, I could start to see the body was telling him he wasn’t four anymore.  His mind called BS on his body and he kept on pushing.  His mortality starting weighing on my mind as I had already seen some of his peers pass away.  He injured his iliopsoas and I was grateful that I’d already retired him from agility and obedience.  My planning for his future seemed almost prescient, as that injury is generally considered career ending.  I was just grateful that I’d started his nose work journey a couple of years earlier.

He’s 15 years old now and he’s probably the last man standing.  He is still completely capable of getting ‘into stuff’ and I am still ‘On the Clock’.  If you leave a plastic bottle at dog height, it had better be empty because he will steal it and use it as a toy. If you leave a bag on the couch, he will rummage around in it until he finds a suitable toy (aka something that is clearly NOT a toy). If his ball ends up under the entertainment center, he will annoy the crap out of you until you rescue it and then he will immediately punt it back under the entertainment center.  He will still chase a groundhog/rabbit/squirrel out of the yard.  He will still bark at cars/bikes/trucks and other offensive vehicles on his roadway.  However, he can still find the 8ft hide or the deep inaccessible one, or the hide that’s 4ft from another hide.  He can still jump on the bed, leap into the car and other crazy Malinois crap that his Vet and Chiropractor cringe over.

He’s 15 years old and I wouldn’t give up a single one of the grey hairs he caused for the world. 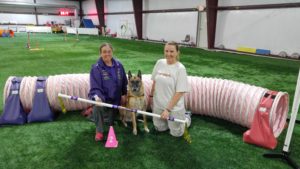 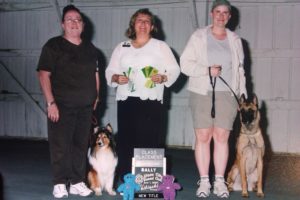